Getting some good night's sleep was crucial after an awesome hike we made yesterday. I managed to wake up at the same time as Antonio, and we decided to cruise around the town. We found a little street workout park in a chill location by the river and did light training after a while.

Some street workout in the morning is a must!

After the training, it is time to fill up with some calories. At the town square, there is a street food stall that makes nice fruit shakes. The scent of Durian can be strongly felt around the stall, so it was reasonable to try out a fruit shake with Durian, combined with bananas.

It is a delicious combination! Also, really cheap noodle soup with chicken! After the meal, we prepared for temple exploration with some local coffee at the 'cinema' place. Finally, we are ready to hit the road to the jungle temples!

Ready to hit the road to the jungle!

This can be quite a busy town sometimes.

The jungle temples are 20 km northeast of Kampong Thom. The first part of the road to there is quite decent until you hit the villages. The road there is driveable but full of holes. Amazing scenery though! Also, riding through the rural area is special.

People will look at you with beautiful smiles and wish you a good day most of the time when you pass around them.

A man doing the fieldwork with a motor cultivator.

The beautiful green fields will dominate the scenery on the way to the jungle.

Taking the cattle out for a walk.

Entering the village before the jungle.

A beautiful road section awaits on the final stretch before the jungle.

After a while, we got to the Tamon Temple and walked around the beautiful jungle a bit. These temples are older than the temples in the Angkor Wat complex, but not as majestic.

Rice paddies just outside the jungle.

The other temples are located deeper in the jungle. We passed through a ticket checkpoint, but there was nobody around, so we just continued to enter the jungle. This was our first jungle ride in Cambodia and it is amazing! Once we were hitting the muddy roads, we knew we were on the right track! Hindu temples are scattered all around this jungle, showing up with their mystical appearance in the dense jungle.

We also found an abandoned treehouse village near the river.

You will be tempted to stop here in a while and absorb all the energy around you!

Entering deeper into the jungle.

A deep jungle trail that is quite well-maintained.

An unmarked Hindu temple slowly getting reclaimed by nature.

The entrance to the Hindu temple ruin.

A river of ants constantly in the flow.

They abandoned the hammocks too!

Another unmarked temple with an interesting design.

After taking our time diving into the jungle and the mystic remains of a long lost civilization, the dark was near. We quickly rode away from the jungle, backtracking through villages in pure darkness. At one point we saw a peculiar sight. A drunk father is trying to hold onto his bike while his young son was following him with a cow beside them.

They probably had a long way to go. On the way back to Kampong Thom, we stopped at a random roadside restaurant where we ate some epic baguette sandwiches with beef skewers, all served with papaya salad and hot chili. One slightly drunk man made us at home with his toasts and lots of beer.

We also learned him our toast phrase: 'Živjeli!'. It was a really lovely random little moment. After devouring the sandwiches, we continued to Kampong Thom. A

fter getting back to our guest house, I felt the tiredness from the jungle combined with a mellow beer influence. After that, we had a long, long night that was fueled by many beers.

I can only say that this was definitely one of the most fun and weirdest nights in Cambodia so far! To get up to date, check out the previous chapter!

On day nine of our journey, we explore the haunting recent history of Cambodia in Tuol Sleng and reflect on a magnificent Mekong River cruise. 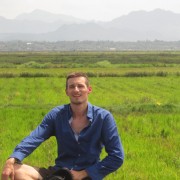